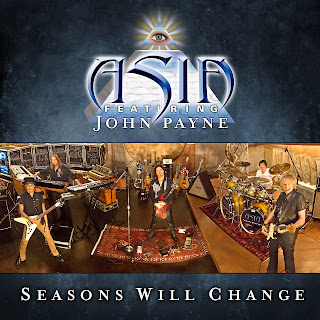 John Payne explains: “‘Seasons Will Change’ showcases elements of both vintage and modern rock music with notable characteristics of both the progressive and AOR genres, a tightrope that this band expertly walks with confidence and swagger. In an endless sea of bubblegum, disposable, three minute, computer driven music, we take our lead from the masters of the 1970s. In that time, bands released extended length singles separate from an album release. Epic songs like ‘Hotel California,’ ‘Bohemian Rhapsody’ and ‘Stairway to Heaven’ still live with us today due to this strategy. It’s time to lead and not follow. We’ve all waited long enough for a return to this classic approach.”

ASIA Featuring John Payne has been touring North America since 2008 and playing to enthusiastic fans across the USA and from Canada down to Mexico. A high-powered spinoff of the original ASIA group formed in 1981, ASIA Featuring John Payne consists of John Payne (lead vocals, bass), Jay Schellen (drums), Erik Norlander (keyboards), Moni Scaria (guitar) and Jeff Kollman (guitar). While Payne, Schellen and Norlander have been working together since the band’s inception, the current lineup with guitarists Scaria and Kollman was finalized just this year in 2012.

In 2006, Geoff Downes left the band to reform the 1982 line up for their 25th anniversary.
On the 9th of May 2006, John Payne, Geoff Downes, John Wetton, Carl Palmer and Steve Howe contractually agreed that John Payne would continue his 14 year legacy with ASIA as “ASIA Featuring John Payne.”