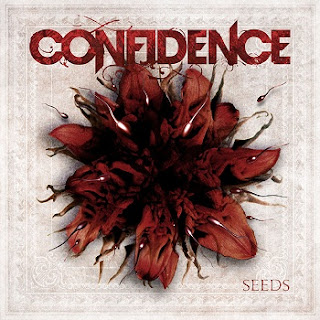 As reported from Metal Revelation, the Swedish rockers from CONFIDENCE have presented the details for their 2nd release today. After the great success of their debut album “Prelude”, the band is ready for the next step and follows a tight schedule of 2 releases a year.

CONFIDENCE will release their 2nd digital release “SEEDS” on November 23, 2012 through all popular download platforms.

The artwork is once again from the hands of Merlijn Zeeders from Blacklake Design, who was also responsible for the “Prelude” artwork.
Last week, it was already announced that the band tapped KEVIN CHURKO to mix the “SEEDS” release. Kevin Churko is a Canadian record producer/engineer and songwriter that has worked for some of the world’s biggest names including Ozzy Osbourne, Shania Twain, Ringo Starr, Five Finger Death Punch, Hinder, In This Moment, Britney Spears and many more. He currently lives in Las Vegas where he works out of his private studio “The Hideout” on Las Vegas Blvd, where also the new CONFIDENCE songs have been mixed.

This 4-track “SEEDS” release is presented as a “digital release” and not as an EP.
Lead singer Emil Kyrk about the concept behind the band concerning releases : “It is a new world we live in, the old world of record companies, album releases and CD’s are dying. Internet has effectively worn down the old dinosaurs in the music industry, it’s time to embrace the new technology instead of trying to get the old days back.

This is the reason why CONFIDENCE will not release our material on a traditional label or on physical media. Instead, we will use the digital channels that exists today. And why release a full length album where half of the songs are poorly produced because of the very slim budget todays record companies can offer, when you can release songs whenever you want, when they are done, through digital channels ?

As with our music, we will go our own way as it comes to releasing songs. Each digital release will contain four or five songs, with at least two releases a year. Our fans will always be able to enjoy new and fresh CONFIDENCE songs.”