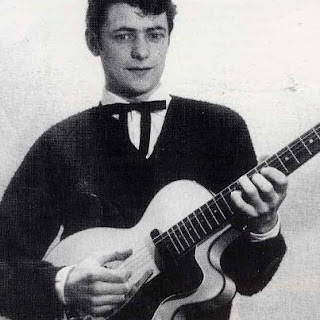 Thank you Jim for finding this great shot of Ritchie as a young man. Very cool.

I first met Jim Sullivan in 1958. He was introduced to me by my sister in laws brother. We both lived in the same area: in Middlesex, Cranford. He was playing with Marty Wilde and the Wildcats. He showed me another level of playing. He was probably the most advanced guitarist in the London area. I would listen to the radio every week there was a Marty Wilde show. Jim was often featured on the show so I was glued to the radio. He also made some great instrumentals. One being Trambone and one being Peak Hour. He was the 1st guitarist to play through a wah wah pedal. It was a Deamond foot volume and tone control. I remember an instrumental called the bat, where he used the pedal. That would’ve been around 1959. Last time I saw Jim was in LA where he was playing with Tom Jones. He was one of England’s finest players, a mentor and a good friend for me. His playing will always be in my heart and live on. God bless you Jim.