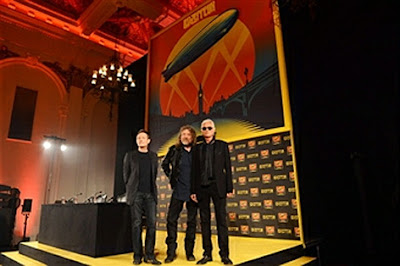 I was wondering if each of you could tell the audience what your lasting memory is of that great night in December 2007.

Jones: “My lasting memory… getting through it all. Yeah, it was pretty good. It worked out really well, but it was a relief at the end of it.”

Plant: “To me, I think, relief… it’s a terrible thing to say, because I do like relief, and you can never condemn it, but in truth, the idea of actually being where I am now in my lifetime, to get back in the middle of that music was a spectacular experience, and I was approaching it from a different angle, so to get through it and come out the other side was something not much short of miraculous, I think. But great fun.”

Page: “Yeah. The lasting memory of it is that I remember walking up the steps onto the stage, and then the moment right at the very end of it. The rest of it had passed very, very quickly, actually, but I knew, and the lasting memory of it was that I knew [we did] what we intended to do, which was to go out there and stand up and be counted and let people who maybe didn’t know Led Zeppelin but had heard a lot about it, to show why we were what we were. And not only that, but we’d had a really good time that night and made a lot of people happy.”

You started the show with Good Times Bad Times: was there any significance in choosing that song to start with, and does that sum up Led Zeppelin’s career?

Jones: “Well, it was [the first song] from the first record, wasn’t it, so it seemed a fitting beginning, although I’d forgotten quite how complicated the first riff was… and later regretted it! But I think we did a good job. It just seemed a good, rousing start to the evening.”

Plant: “It’s a pretty concise piece of music in the Zeppelin world. It’s like a ‘tune’, rather than an extended piece of music for itself. So it was a good place to start: nice and concise and that finale at the end of the track, there was a little bit of a knowing and interesting look [going on] between Jimmy and I, because on the outro, it’s guitar and then a little bit of vocal scat, and then a bit of guitar, and he was very interested in that kind of… to get into a groove early on. And to hear Jason, wailing away behind us… I mean, just singing his heart out.”

Page: “I think, because people wouldn’t have known what we were going to play, and what we going to start with, and there’d probably been a lot of guessing about what it would be… you’d probably imagine that would have been one of the last choices they’d have come up with. It was more the unexpected as well, like, ‘y’know, wow, they’re taking that on as the first number – I wonder what they’re going to do next?’”

Are there any particular memories from your time together in the 70s where you look at each other and give a knowing nod?

Plant: “I think, y’know, the thing is, we don’t see each other too often, but we’ve just spent an hour or so discussing this stuff, and no sooner do we start talking than some little innuendo creeps in. It’s just what happens when you’ve spent a lot of time together… some old memory pops up, and you go, ‘Whoa, that’s one to forget!’ There’s lot of those things drifting around.”

I would like to know, did Jason Bonham do the job, were you happy with his drumming?

Page: “Jason was absolutely monumental in the performances he played, from the very first rehearsal right through to the O2. He was incredible; the whole spirit and enthusiasm, and his knowledge of what made Zeppelin tick musically was just… it was just really wonderful to be able to work with him for that amount of time, to do a proper, full set, and really communicate musically with him. It was really, really good. Nobody else could have done it.”

Plant: “We’ve played with him before, at his wedding. Sadly, he decided to go to bed during the wedding reception, and because I was a kind of a friend of the family from way back, I was the one who had to go up to his room and get him to get out of bed! [to the others] Do you remember that?”

Where do you stand now with regards to Stairway? Page and Plant had different opinions about it…

Plant: “Well, I struggle with some of the lyrics from particular periods of time. The musicality and the construction of it, you know, is peerless. But maybe I didn’t feel quite the same about the lyrics later on in life, as I got further down the road. Maybe I’m still trying to work out what I was talking about… every other fucker is!”

Why wait five years to release this beautiful DVD?

What was the first song you played in the first rehearsal?

Plant: “We didn’t have any material, did we?”

Page: “Well, not really, we were just doing whatever. But it was just the intensity of what was going on… y’know, the communion, if you like, of the four of us. It was very intense, right from the start. The first thing that we did… Jason mentioned that we did Houses Of The Holy as one of the first songs. He wasn’t quite sure why we did Houses Of The Holy… it was probably because it was going to be one of the hardest ones that we were going to have to approach, for each and every one of us, so that’s a good one to be limbering up with, and just getting into the groove, if you like. There was a willingness, it seemed, to do it.”

Jones: “Jason was great, because all the songs we played throughout the Zeppelin years, as the setlists [became] different, we would end songs in a different way to accommodate the next song, and so we would play something and say, ‘Well, how does this one end?’ And we’d all look at Jason, and Jason would go, ‘Well, in 1971, you did this, and in 1973, you went into this…’ et cetera. And so he had this encyclopaedic knowledge of everything and it was just a real compliment.”

Plant: “He’s got some great bootlegs. Some great Beatles stuff too. He’s a mine of information. I don’t know which band he’s going to be in next… but he’s really got it down.”

At any point at the 2007 gig, or at any point since, did you think, ‘That was great, I fancy doing some more of those’? And if so, what’s stopping you?

Plant: “Actually, can I ask you a question? Have you all been to see the film? Did you enjoy it? Then we’ve done our job.”

When you look at the music stars of today, do you feel that in your time, you had much more fun?

Page: “Yeah, I mean, as far as being able to create music and drive onwards without all the sort of trappings that there might be today, absolutely. We weren’t having to follow up a single or any of this stuff; we were there to make music and go out and propagate and spread it by playing concerts. Yeah, it was a much easier process, and more positive for musicians.”

Plant: “And you know, there was no long-term retrospective overviews about people’s careers and stuff. The bands that were playing when we first kicked off together, nobody expected it to be anything beyond the next… experience. Even if it was making records, or not, there was no concept of thinking about this [referring to press conference] and looking like a bunch of soccer managers doing an interview at the end of the match. It was more like, the people that we met along the way were… brigands to some degree. Everybody was just having a great time, and the concept of looking back and asking about what you said about, y’know, ‘Don’t you think you could do it again?’… the great thing about what we were when we were really happening and we were together, and that was our sole purpose in creative life, was that we were always creative. And we were talking just an hour ago about how you would just move off on an angle or a diagonal somewhere and another shape of music would come through and we would build that and develop it into a new project each time. There was no thought about, y’know, ‘What do you think about it now?’ I was still about thinking about whether or not I’d finished my French homework, y’know?”

Was there a point during the set when you thought, we’re really doing it?

Hypothetically, had you made some scenes like in Song Remains The Same, what fantasy sequences might have represented you in 2012?

Page: “The whole concert was a fantasy sequence, really.”

Plant: “I think going down the river on a boat was already the beginning of it. When we got to the O2 by boat, y’know, I saw Arthur waiting for you, there were three princesses…”

My impression is that you created the ultimate live versions of the Led Zeppelin songs. Do you feel it worked that way?

Page: “Well, the versions of the songs that we’d have done in, say, 1969, would have changed and mutated by the time we got to 1973 or 1975. The music was always mutating. In the rehearsals, there were subtle differences to them and sometimes quite dramatic differences to them as far as the textures and the energies of them, but as far as what we did [on the night], to have just the one concert, yeah, I think we did pretty definitive versions of the appropriate material… certainly better than any covers bands would do, that’s for sure.”

Jones: “Yeah, I think the technology obviously did help to a certain extent. A lot of microphones, a lot of cameras, so everything looked fantastic and sounded fantastic.”