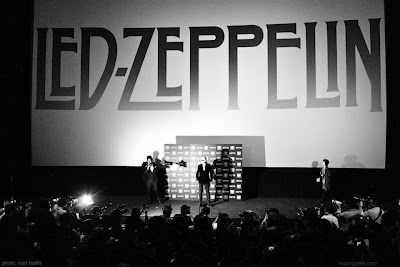 In a new interview with Rolling Stone, Jimmy Page acknowledged that Led Zeppelin were considering touring after their December 2007 show at London’s O2 Arena.

However, Robert Plant was busy at the time.

“He was busy,” Page says. “He was doing his Alison Krauss project. I wasn’t fully aware it was going to be launched at the same time. So what do you do in a situation like that? I’d been working with the other two guys for the percentage of the rehearsals at the O2. We were connecting well. The weakness was that none of us sang.”

Page goes on to say that he, John Paul Jones and Jason Bonham rehearsed together in 2008. “We didn’t do any professional recording,” Page says. “We just had a little digital recorder. I thought it was good. I wasn’t going to away from it. But the weakness came up again. It was, ‘We gotta have a singer.'”

Apparently, several vocalists rehearsed with the band, although Plant won’t say exactly who, although he doesn’t deny that Alter Bridge frontman Myles Kennedy stepped in. Steven Tyler also said he jammed with the band.

“The timing wasn’t the best,” Page says. “We had put so much toward the O2. And the three of us were catching up with stuff. It was very good, seriously promising. But there was this other thing going on.”