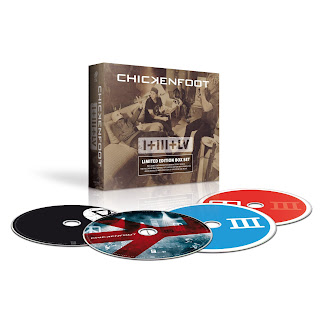 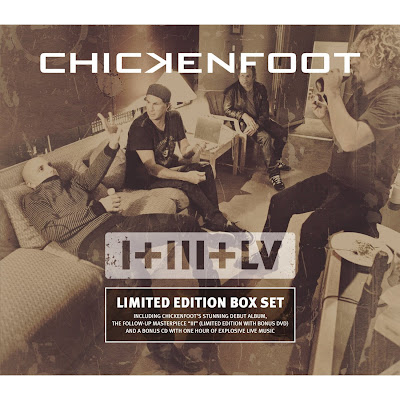 We are proud to announce the release “I+III+LV” by Chickenfoot on January 25th, 2013. The box set will include the worldwide Top 10 debut album “Chickenfoot” and the equally successful follow-up “III” and the limited live release “LV”, released in December and limited to 10.000 numbered copies in Europe.

“LV” features over an hour of live music made of four unreleased live songs recorded during the “III” World Tour and a series of very rare digital bonus tracks and B-sides live.

Since their debut album in 2009, Chickenfoot is one of the names mentioned the most in the industry, and one of the most loved among rock fans. Guitar virtuoso Joe Satriani, Pepper’s drummer Chad Smith together with Sammy Hagar and Michael Anthony (ex Van Halen) reinvented the meaning of rock “super-group”, even if the fabulous four don’t like the definition themselves, having started the band just by jamming in clubs, without the idea of making it a successful recording band.

The worldwide rock community welcomed the band’s debut album “Chickenfoot” as one of the most inspired and honest rock record heard in years. “I” became one of the biggest rock successes of 2009. It ended up selling close to one million copies (#3 Platinum record in USA, Gold Impala Award in Europe, thanks to a stunning series of Top 10 chart entries).
The album is included in the box set, for the first time featuring the rare B-Side “Bitten By The Wolf” previously only available on vinyl LP.
The follow-up “III” repeated the success of the first album and showed the band making a big step forward in terms of song-writing and sound identity reminding everybody how arena rock can be a fine art form and the most exciting thing around. The box set includes “III” in its limited CD+DVD version, featuring a bonus DVD with exclusive behind the scenes content, videos and live music.

“LV” Chickenfoot’s first live CD, includes rare live versions of their biggest hits like ‘Big Foot’, ‘Oh Yeah’ and ‘My Kinda Girl’ and 4 unreleased live songs from the most recent world tour featuring the phenomenal Kenny Aronoff on drums (stepping in for Chad Smith, being temporary busy with the Chili Peppers…).
For all the most dedicated fans who have already bought “I” and “III” Chickenfoot will make the extra disc “LV” available for a limited period as a stand-alone CD, released all over Europe on December 7th, 2012 (strictly limited to 10.000 numbered copies).

Sammy Hagar expressed his enthusiasm with his proverbial energy when asked to comment about the limited release of “LV”.
“Every now and then with great bands some songs just outdo the original recordings live. À la ‘Live at Leeds’, ‘Frampton Comes Alive’ etc. I feel these four live Chickenfoot tracks do just that. Especially ‘Something Going Wrong’. If it were 20 years ago when DJs were allowed to play what they wanted to play, this song would be a hit at rock radio. There’s magic there, check it out. If the fur doesn’t come up on your arms it wasn’t loud enough!
Crank it up and Enjoy!” – Sammy

Bonus
12. Bitten By The Wolf

DVD
1. The Making Of Chickenfoot III
2. Behind The Scenes
3. The Packaging
4. Greeting

Live rarities and B-sides, recorded in 2009