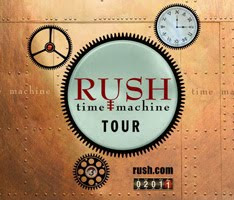 “Rush played their 1981 album Moving Pictures every night on their 2010-2011 Time Machine tour, so it was a little tough to pick one show to film for a DVD and CD release. “We realized that we’ve recorded almost all of our DVDs abroad,” Rush frontman Geddy Lee tells Rolling Stone. “And we had never done one in America, and we noticed we were doing Cleveland on the last leg of the tour. We thought it was an appropriate choice seeing as Cleveland’s such an important town in our history. It was the first city that was ever warm to us. We thought it would be kind of apropos to come full circle and do that particular show there.”

Time Machine 2011: Live In Cleveland hit shelves on CD and DVD on November 8th. The band is also releasing Moving Pictures: Live 2011 as a digital download and vinyl record. Lee admits that he feels a little extra pressure at shows when the cameras are rolling. “You always get a little bit of a tight ass when you’re doing a recording,” he says. “Even though we’ve done I don’t know how many of these things by now, you want it to be perfect. And of course it rarely is perfect, but you just hope for a good show and we certainly felt we did a good show that night. The crowd really inspired us to want to work as hard as we could. But you can say you’re a veteran, but when the red light comes on, you do tighten up a little bit.”

Check out their performance of “Tom Sawyer” from the DVD, with a hilarious time travel-themed skit they showed before kicking into Moving Pictures on the tour.”