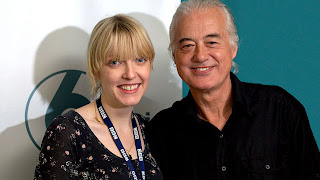 Palabras recientes de Jimmy Page pertenecientes a la entrevista realizada el pasado lunes por  Laure Laverne en BBC Radio 6 Music:
“John Bonham was an extraordinary, extraordinary musician who had this incredible technique that was head and shoulders over anyone around him when he was still in his teens — absolutely phenomenal,” said Page. “He kept finessing his technique and his vision of the drums. He had a definite vision of the drums, and how they should be played, and how they would fit in with a band, and also how they would be soloed — in his solos. It’s without doubt that his technique was, as I say, beyond everybody else’s, and that’s why he’s so looked to — and looked back to — with such reverence and love, really, because he was so extraordinary.”

Page remembered meeting Bonham for the first time at a small London club when he was drumming for Tim Rose of “Hey Joe” fame. It was in the Midlands that Bonham had a reputation as an incredible talent, but Page recognized immediately from “the attitude to his playing” that he would be the right drummer for his new band he was putting together. He said Bonham’s sense of dynamics was “the key to what I was gonna try and get together in this Zeppelin band.”

As for the rest of the group, Page said, “Of course you had four people in Led Zeppelin which were sort of musical equals, if you like. I would say so. But John [was] the backbone of the band.”