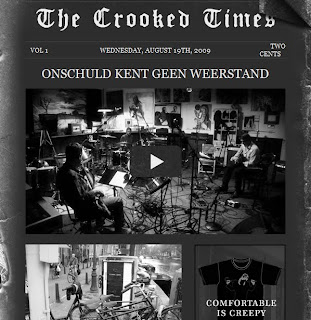 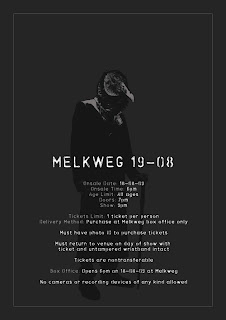 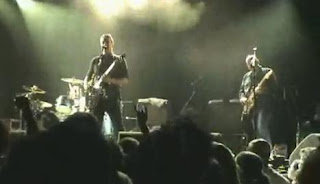 Well, what an incredible show that was! The anticipation from the start was huge – I’ve been to the Melkweg many times and I’ve never heard a roar like that just for a band walking on stage. Grohl’s ear-to-ear grin while he and the others waited for the noise to die down so that they could start already promised how much fun this was going to be.

It was creative right out the blocks, with JPJ bravely strolling on with a huge 8-string slide bass that was the centre-point of Nobody Loves Me. Various instruments were swapped along with the mood and tempo, which varied wildly, borrowing aspects from both the Foo’s groove and Homme’s self-styled ‘robot-rock’, but there was often also a classy classic retro feel to their unusual sound. No doubt this was in large part due to JPJ’s artistic flair, both in the creative process and the execution, but also exemplified by Homme’s several lengthy and award-worthy guitar solos.

Grohl was quite simply astonishing. It’s not easy to shine from the back of the stage and the beat of the music, but his intensity, passion and huge enjoyment was clearly visible from the get-go. He apparently doesn’t need to see in order to drum – with his long hair thrashing about almost as much as his arms were, he looked more like Animal from the ‘Muppet Show’ than anything else. Don’t get me wrong: I love him up front in the Foos, and he’s an excellent guitarist, but the man was clearly born behind a drum kit and shouldn’t ever be allowed to leave (unless the world runs out of drum sticks – he was certainly getting through them last night). His control, his timing, his speed, and the technical difficulty of what he achieved last night, with the syncopated off-beats and multi-mid-piece tempo switches, were belied by his casual and jovial demeanour. An absolute natural.

But to say that Grohl shone brighter than the others would be misleading. This gig could so easily have been three deservedly huge egos fighting for the stage, but I didn’t even see one ego between them. If anything it was clear that the others are in awe of the ever-humble John Paul Jones and defer to him, but only as and when the sound calls for it. He exhibited his truly virtuoso talent on a variety of instruments – including a wonderfully kitch keytar for one lighthearted track that almost felt like an intermission – but watching he and Homme facing off up close and jamming together was an absolute pleasure. They even seemed like there were improvising a few times, and with the smiles on their faces betraying their joy at sharing a stage, they bridged gaps of genre and generation with an ease and professionalism that few can match.

Homme looked the most relaxed and composed I’ve seen him, and his voice was in fine form throughout. His banter with the crowd was unusually gentle and affectionate: at one point he even delayed the start of a song to go and get a bottle of water for a thirsty girl in the front row, and then re-tune his guitar. There were a couple of false starts (at least one of them deliberately done by a mischievous Grohl), and one significant technical problem in about track 5 when someone must have kicked out a plug and we lost his vocals and guitar simultaneously for a while, but he took it all his amicable stride. Whether or not you think he deserves his nickname of ‘Ginger Elvis’, he undoubtedly has the stage presence of a king.

I certainly wouldn’t want to ignore Alain Johannes in this review, as he is an accomplished musician who put in an excellent performance last night. He was balanced, innovative and technically brilliant. He and Homme have a heritage together that was clearly evident in their interplay. However, I couldn’t help but feel that his was something of a supporting role for the main trio – a feeling that matches the line-up, of course.

One of the most impressive things for me was that these guys were almost unbelievably *tight*. Their timing throughout some pretty complex content was among the best I’ve ever seen on a stage, and that is including bands that have been playing together for 20 or 30 years. Them Crooked Vultures have only been at it as a group for six months, but it looks like decades. For such a new band to be so tight on any particular sound is remarkable professionalism, but to keep it throughout such technical work and such an array of mood changes takes a great deal of intuition and understanding of each other. They must clearly be good friends to pull that off.

Highlights for me personally were probably the funky riffs and fantastic drumming of Scumbag Blues, and the truly rocking Elephants, which looks set to be perfect as either an opener or an encore for some time to come. It’s hard to pick tracks out though – not least because we don’t know even all their names yet.

Although the no-camera policy was very strict (I know of more than one person thrown out), security did actually allow a few stage-divers, which was surprising and added to the laid-back but excited vibe of the show. Four or five fans even made it onto the stage right at the end, with one happy chap shaking Grohl’s hand and then getting a big hug from Josh Homme before being thrown unceremoniously back into the pit.

The production value was also excellent, with a simple but effective lightshow that shifted focus subtly and emphasised all the positives, and also a mix that allowed the wide-eyed crowd to hear every nuance of what each of their idols was doing, even during the loudest and heaviest parts of the set. The sound was so clean that I’d dare to suggest that the band are actually a little heavier than people may have realised – in most similar gigs (if such things exist) there would have been the familiar ‘wall-of-sound’ a few times. So, major kudos to the mixers, the production team and the Melkweg for a quality job.

Overall, this was a set of consummate professionals at the top of their individual games and in the stage locations where we get their very best. They worked together almost disturbingly smoothly, not just on stage but undoubtedly during the writing also, producing a complex variety of retro, groove, hard rock that was an absolute pleasure for all to hear – there honestly wasn’t a bad track in it. Above all, they looked like they were genuinely loving it; as if it was almost as much of a privilege for them to play as it was for us to listen.

Them Crooked Vultures, deserve the future.