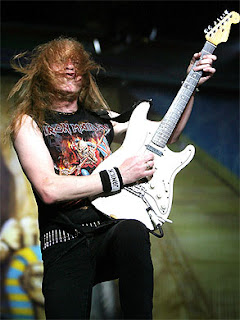 “Somewhere in the sky up above Mt Smart Stadium the Iron Maiden Gods were smiling devilishly. In fact, they were raining down great big belly laughs on the 18,000-strong crowd because apart from a few showers early on there was no sign of the day’s atrocious weather. Not that it would have mattered because nothing was likely to dampen the spirits of this predominantly black t-shirt wearing army. This lot were devout, loyal, and diehard………….” read more.

“So when Iron Maiden brought their slice of 80s metal revivalism to Auckland on Friday night it was really a question of whether Auckland’s rubbish weather could derail their first New Zealand concert in 16 years.
The heavens held back as Maiden took to the stage in front of a Mt Smart Stadium crowd which lead singer Bruce Dickinson – decked out in a camo muscle vest – declared to be 18,000 strong.
“On a shit day as well,” he said………….” read more

The Number Of The Beast
The Evil That Men Do
Sanctuary